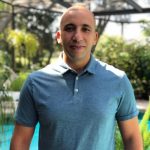 Adnane Taifi was recently named the varsity girls soccer head coach and has an extensive background in the sport. Coach Taifi was raised in Morocco where his passion for soccer began. He came to the United States in 1998 and pursued a Bachelor’s degree in business and a Master’s degree in French. He has been